Another major TAG Heuer sports replica shop sponsorship announcement, another whirlwind press trip to attend said announcement, and — best of all — another opportunity to wrist-test one of the brand’s newest models — in this case, version 2.0 of the original TAG Heuer Connected Watch, dubbed the Connected Modular 45. And boy, is it modular. 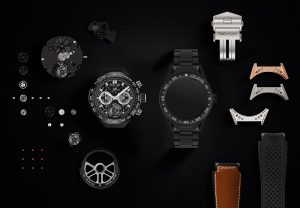 TAG Heuer Connected Modular 45 – parts
Regular readers of my “Borrowed Time” series of experiential watch reviews may recall last year’s trip to the MLS All-Star Game in San Jose (for which TAG Heuer was official timekeeper), during which I put the original TAG Heuer Replica Connected Watch through its paces. In April, TAG Heuer invited a small group of journalists to Los Angeles for another major event: the celebration of its partnership with the Amgen Tour of California and professional cycling’s BMC racing team, which featured the unveiling of the tournament’s official Best Young Rider jersey, designed by graffiti artist and TAG Heuer “ambassador” Alec Monopoly. For this experience — which included a cocktail reception (and Alec Monopoly art exhibition) at Galerie Montaigne and a dinner at West Hollywood’s legendary Chateau Marmont — I was hooked up with the Modular 45 and free to discover the numerous upgrades from its predecessor and additional functionalities, of which there are many.

TAG Heuer Event – Alec Monopoly
Alec Monopoly (in hat and scarf) with TAG Heuer North America president Kilian Muller, Amgen Tour of California president Kristin Klein, and models for the Best Young Rider jerseys, at the sponsorship launch event.
A few notable facts about the new Connected Watch and its upgrades:
It proudly bears the “Swiss made” designation. Despite the Silicon Valley technology at its core (you may recall that the watch was the product of a partnership between TAG Heuer, Google, and Intel), the watch is designed, developed, assembled, and final-tested in in the same factory in La Chaux-de-Fonds that produces TAG Heuer’s mechanical chronographs. Even the motherboard is produced in Switzerland.
It’s available in 56 different versions — 11 standard models plus 45 other “on-request” versions. Options for the 45-mm diameter case include satin-finished or polished grade 5 titanium, 18k rose-gold-plated, black ceramic, and with or without diamonds. Furthermore, there are 18 different strap variations available — from rubber to natural leather to anthracite gray leather to bracelets in titanium or ceramic. As seen in the graphic at the top, even the lugs and buckles can be independently changed. You’re beginning to get the picture, right? This is a watch that the wearer can truly make one’s own, and we haven’t even gotten to the dial display options yet.
You can use many of the watch’s features even if you’re away from your phone. In a significant upgrade from the original TAG Heuer Connected, the Modular 45 continues to compute, display, and exchange information as long as you are have a Wi-Fi connection and are in contact with the Cloud. Several applications — music, timers, alarms, and the pedometer for counting steps, for example — are installed directly in the watch and require neither Wi-Fi nor a connection to a smartphone to operate. The watch also has built-in GPS and an NFC chip to make contactless payments via the Android Pay app — both of which are also non-dependent on a smartphone connections. Of course, when you are in contact with your phone and its apps, the watch will alert you with a soft but noticeable vibration when you have a new text, Facebook message, sports score, et cetera. 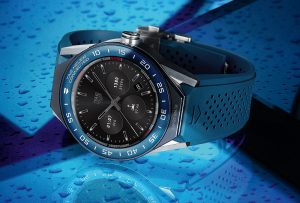 Its battery offers more than a full day of power. Simply place the watch on the plugged-in contact charger and it will be fully charged in minutes, depending on how much energy remains. Powered by the new Android Wear 2.0, the watch has 4 GB of storage memory and can be synchronized with any mobile phone operating on Android 4.3+ or iOS 9+. (iPhone users like myself, of course, must download the Android Wear app, as well as the new TAG Heuer Connected app, before they can synch their phone with the watch.)
By far the most fun aspects of the Modular 45 are the almost infinitely customizable dials. As on the original Connected Watch, this one’s high-resolution OLED touchscreen face is based on the classical design of the TAG Heuer Carrera, but within that general aesthetic universe there exist many variations. Like its non-modular predecessor, the watch offers “interactive counters,” or the option to replace the digital chronograph subdials on the iconic tricompax Carrera dial with other useful displays based on the watch’s apps: if you’re a fitness freak, you can display calories burned at 3 o’clock, steps taken at 6 o’clock, and an alarm reminder at 9 o’clock, for example. However, while the 1.0 version of the Connected replica watches forum had just three analog-style Carrera dial options — three-hand, three-register chronograph, and GMT — TAG Heuer has developed 30 styles for the Modular 45. The roster includes white, black, light gray, anthracite gray, chocolate brown, navy blue and gold colors, all with sunray finishes; and three-hand, skeleton, day-date, GMT, and one-, two- and three-register chrono designs. Vintage Carrera enthusiasts can even call up an electronic version of the classical Panda dial. Here again, you don’t need your phone to initiate the customization; just swipe your finger from right to left on the touchscreen crystal. With the watch in my possession only a few days, it was impossible to try them all out, but it was good to know that there was a look for just about any set of clothes you’d want to match.
Yet even these 30 styles are just scratching the surface of the customization capabilities. The Modular 45 comes equipped with the TAG Heuer Studio function, which allows the wearer to create what must be hundreds of different combinations of style, color and detail. With a simple step-by-step process that the watch guides you through, you can control such subtle aesthetic details as the type of metal used on the indices and hands, the types of Super-LumiNova highlights, even the placement of lacquered tips on the hands. Needless to say, I took great advantage of the TAG Heuer workshop options during my trip to La-La Land. I dialed up (sorry) a bright orange three-hand day-date look for afternoon swimming and pool lounging. Later, after getting decked out in a gray suit-and-tie combo for the evening festivities, I assembled a sunburst-finish anthracite gray three-register chronograph look. Said evening events included the cocktail party/sponsorship announcement and the dinner at Chateau Marmont, to which guest of honor Mr. Monopoly wore his own personally customized Cheap TAG Heuer replica watches — though in his case, the watch was the TAG Heuer Carrera Heuer 02-T tourbillon watch, and the customization was a grafitti finish he’d applied with a spray paint can… but I digress. 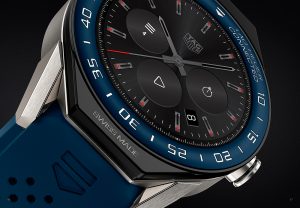 Speaking of the Heuer 02-T, that brings us to the final level of versatility and personalization that the Modular 45 offers. As TAG Heuer CEO and Connected Watch mastermind Jean-Claude Biver had promised when I interviewed him at the initial launch event in 2015, the owner of a Connected Watch Modular 45 can “upgrade” to a more traditional Swiss-made mechanical watch simply by purchasing the “mechanical module” of either the three-hand Carrera Calibre 5 or — depending on your bank account — the Carrera Heuer 02-T, which incorporates both a tourbillon and a chronograph. This was always the concept Biver had in mind when he created the watch’s “Connected to Eternity” tagline. After the L.A. trip, I had a few days back in New York to go back and forth with both the Connected Module and the Carrera Calibre 5 module, and found that it was in many ways advantageous to have both options. Sometimes you simply don’t want to have to drag a big charger along on a trip when you have so many other gadgets and wires to tote around these days. And I especially enjoyed the ability to wear the Mechanical while recharging the Connected. After all, for many of us, going even a short while without a wristwatch must seem like an “Eternity,” right?